If you would like to know why this page is here in more detail, the full policy regarding unposted publiccation graphics can be found on the opener page of the Publications Collection. I’m not going to repeat the whole thing here.

Enough to say, these are graphics-only versions of publication projects which, for one reason or another, were abandoned by the author before they were complete, or before I was able to get final approval to post the finished project with the rest of the publications.

The Travelogue Trilogy: by Anna, (ColdCoffeEyes25)

Once upon a time (i.e., originally starting to post around 2002) there was a fanfic trilogy

It was very popular. At its peak it had hundreds, possibly even thousands of followers.

Unfortunately, rather a lot of it was written while the author was at home feeling unwell. Two-thirds of the way through the final volume, she was diagnosed with a serious illness.

To the best of my knowledge, this portion of the story had a happy ending. She received medical attention, recovered, changed jobs, and found a number of new projects with which to occupy her attention.

And, unfortunately, she no longer had a lot of inclination to stay home and write. The final volume remains unfinished, and is long abandoned. I would not be astonished to learn that, in retrospect, the whole period she was writing it is associated with a rather frightening period of her life. But that is neither here nor there.

I had already requested, and had been given permission by the author to produce Red Hen editions of the trilogy. The first two volumes were completed, pending edits and corrections, and a fair degree of work had been done on the third volume when the project was abandoned by the author. Consequently, the graphics for the project have been posted here.

The stories themselves were readily found online in .html format for over a decade afterwards. The hosting archive upon which they were once posted is online no longer, although it [www.witchfics.org] can be found via the Wayback Machine.

Jewel of the Nile (Gaphics version) Compressed for download (16.7MB) 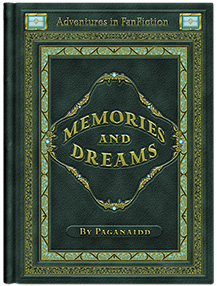 Memories and Dreams: by paganaidd

Fast-forward a decade later. There is another fanfic trilogy. This one is complete. I requested, and recieved permission to base a Red Hen publications projet on it. Since all three of the stories involved were shorter ones, we decided to roll them all into one volume as an anthology.

This trilogy was also an illustrated work. I got it to the point of a having a rough final version, with all the illustrations in place. The author had said something about possibly wanting to make some changes to the text. The checkfile was sent. My email account decided that it would rebel, and it wasn’t until several tries later that I finally believed that I had managed to send it. (I was wrong.)

It was never acknowledged. I now suspect it was never recieved. Email sent without attachments (which ought not to have been a problem) were also not acknowledged, nor were my reviews left on the archive where the original version is posted, requesting to know whether the files had arrived. To all extents and purposes, the author had vanished. At any rate, I was unable to contact her.

It later transpired that she had been overtaken by any number of the ills that modern life is heir to. We eventually managed to contact one another, but we still never got the project into the edit stage, and I never got permission to post the completed project. And it has now been over two years.

I do regret this. It is a lovely fic (or, rather, set of fics). It can be found on the author's page at ff.net, however, so I don't suppose it is likely to disappear unless the author decides to pull it down. But I would have so much rather have been able to post the completed project on this site. 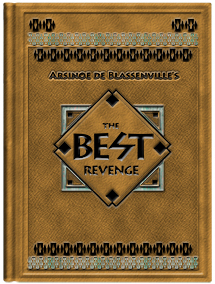 And now,as of the year 2020, I have something a bit different to add to this page.

So. We’ve got yet another fanfic trilogy. This one is also completed. In fact, this particular project was finished, and posted, in 2011. It has been online over in the Publications area of the site ever since. Indeed, it can still be found there.

However, the version which is *now* to be found in the Publications collection is the 2nd edition. The text has been reformatted and the illustrations have all been completely redone.

Indeed, under normal circumstances, I’d simply have replaced the first edition with the second and dispensed with the illustrations in this particular document entirely. I've done as much with the handful of other Publications which went into later editions after their inital posting.

However, in this case, I felt that to do this would be to do a slight disservice to the author. Yes, I am fully aware of the statement that; "the author is dead", In in fact, I’ve quoted it elsewhere. But, unfortunately, in this case, it happens to be true. And she had approved the original Illustrations. Consequently, I’ve extracted them, and built a graphics-only file which collects them all in one place. Frankly, I suspect her approval was more on the order of applauding the dog who walks on his hind legs, more than anything else. But it really was the best I could do at the time. (If she were still alive, I'm sure she would have been glad to see most of them replaced.)