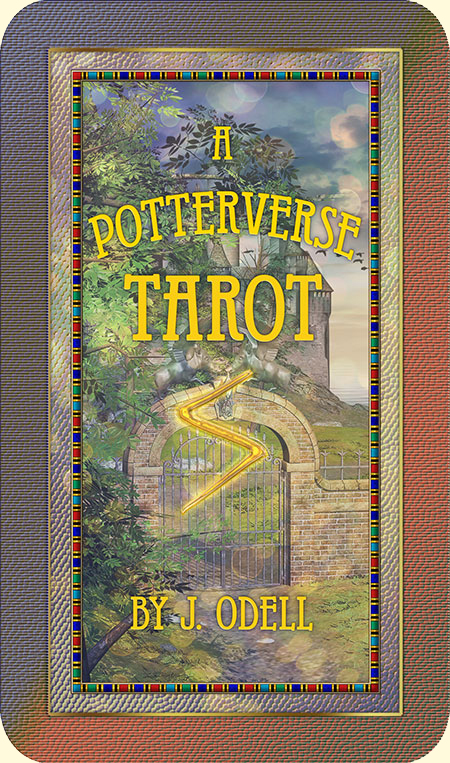 Note: This is collection consists of many pages.

Things are also handled a a bit differently now.

You still get the choice of doing a browse through the whole deck (both versions), in little thumbnails, all at once and moving on to something else, or you can go through the deck card by card, with larger images, capsule interpretations, and the relevant cast members identified, where applicable. But you no longer need to dig down another layer, to find a button panel to get to them. There's a dropdown menu bar right at the top of the page.

And, as in the old site, there are download files accessible from the instructions page.

First off: I think it needs to be stated that this deck is NOT based on canon. The Potterverse Tarot project spun off from a pair of projected Publications projects based on fanfic, the cast members have on occasion been depicted in their fanfic rôles. They also may be depicted at different ages than we saw them in canon. Some of them turn up more than once.

The fanfics (there are two of them, intertwined); both WiPs are: ‘Amends: or, Truth and Reconciliation’ and; ‘In Which the Princess Rescues the Dragon’. Both are by Vera Rozalsky, and may be found on ff.net. They have been in limbo for some years now, I suspect that it may well be wise to consider them perpetual WiPs.

Er… a word of warning; there’s a fair amount of nudity in a classic Rider deck (at least in the Major Arcana), and this is a fairly straighforward Rider deck homage.

It has also rather belatedly sunk in for me that the majority of the viewers here probably didn't live though the ’60s and ’70s where, if you weren't being asked; “What’s your sign?” on alternate Tuesdays, you were probably dabbling in the Tarot. Consequently a lot of them may not be at all familiar with the Tarot.

I gather that in much of Europe a Tarot deck is used to play various games, which were designed for it. Like, say, pinochule, which also has its own deck. I also gather that in those parts of Europe the predominant deck is the Marseille Tarot, which is a traditional deck in which only the face cards have images. In the US, however, the Tarot is associated almost exclusively with fortune-telling, or, more generally, as a meditation aid. I have also heard of it being used as a “random plot generator” by at least one author. (I should think it might be rather good at that. Or at least as good as rolling multi-sided dice a lá Dungeons & Dragons.)

In the U.S., the predominant deck is widely known as the Rider deck — or the Waite deck, or sometimes the Rider-Waite deck. Waite was the author who designed it (although he wasn't the artist who was commissioned to draw it) and Rider the company which published it. This was back in the year 1910, so it's been around a while. And, in most of the English-speaking world it is the deck that everyone knows. Much of the reason for this popularity is that in the Rider deck, every card has an image. It is my understanding that the Rider deck was the first deck to have such.

My little capsule interpretations of the various cards (which really are only capsule interpretations) were compiled largely from the Eden Grey guide; ‘The Tarot Revealed’ ©1960 — which clearly assumes you are going to be using the deck for fortune-telling, and the Stuart R. Kaplan instructions from the Hanson-Roberts Tarot Deck, which approaches it a bit more as a meditation device. Occasionally expanded with variant takes of my own.