Red Hen Publications — Miscellany: The Saga of the Sawhorse

It will be noted by anyone who has been following this site for any length of time that at some point (i.e., around 2011) suddenly most of my work was being created in a low-end 3D program. I had a reason for this.

I had a project. Well, to be accurate, I’d had this particular project for quite some time and didn’t have any good idea of how to deal with it.

This is a fairly long story, and also fairly technical, so settle in for it. After all, on my end it took something like seven or eight years. On yours, it will only take to the end of the page.

I have a friend who has written a number of Oz stories. One of them was published professionally by Books of Wonder (The Glass Cat of Oz © 1995). Several of his serials were also published by Books of Wonder in their ‘Emerald City Mirror’ publication. He also had two longer stories which were unpublished. In 2002 I uploaded the first iteration of the Red Hen Publications website.

The whole point of the site is for it to be a showcase for my book designs. Designing books is my hobby.

Not terribly long after I uploaded the site, I had asked his permission to base publication projects on his unpublished stories. He granted it. The first of his stories which I did a design for was ‘Eureka in Oz’. For that story I was able to modify and repurpose public domain Oz illustrations by John R. Neill, who is the most well-known of all the official Oz illustrators. The second story, however, was not so cooperative. There was no way that I was going to be able to adapt and reuse original Oz art to illustrate that one, and as I’ve said with some frequency, I am a designer, not an artist.

And so the matter rested for some time.

It wasn’t until 2009 that I stumbled into the world of 3D. It soon occurred to me that, just possibly, this could be the answer to my Oz problem. I downloaded the program (which even then had a free version. These days the full version of the program is free — they make their money selling you things to use in it.)

Well, any new skill takes time. It was close to a year before I produced anything that seemed fit for public display. But it did seem to be a viable solution to the problm of getting ‘The Magic Carpet of Oz’ built and ready for posting. Unfortunately, the DAZ Studio — which is the program that I use — is not a modeling program. It will generate primitives (cubes, spheres, etc.) but to build an actual scene you need to use models that already exist. And, despite the fact that most of the character designs for the Oz books have been public domain for decades, models of any number of the Oz characters simply do not exist.

Well, I was able to substitute or modify existing models for the characters that were the most used in the story. And I did what was my best at the time. The story was posted at New Year, 2012. About a week and a half before an inadvertaint disk wipe destroyed all my scene and character files.

I wasn’t altogether satisfied with the posted project, however, because it was incomplete. A story based on the Magic Carpet really requires at least one illustration of the party crossing the deadly desert using the carpet. And I couldn't do one for lack of a Sawhorse and wagon. And while there is no shortage of vehicles in the Poserverse, none of them resemble what I could make out from Neill’s illustrations of the Red Wagon (he never really drew it in detail, but it seated six and most of the models only seated four). And there was nothing whatsoever that resembled the Sawhorse.

Fast-forward to 2013 when I took an ‘Intro to 3D Modeling’ class. I turned out to be fairly good at it, and managed to complete the class project a bit early (see the ‘Aliens!’ entry, in the Classwork collection). In the tag end of the semester, I put together a Sawhorse. It was a fairly crude model, but then, the original Sawhorse was, too. I exported it as an .obj file. (A format used extensively across many different 3D applications.) 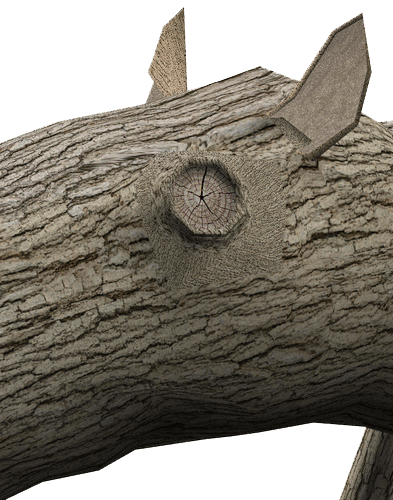 But an .obj file is not a finished model. It needs to have a “texture (i.e, skin)” and it needs to be rigged, so you can pose it. An unrigged model is just a static prop.

Well, it took a while to try to push the project a bit farther down the track. I first tried just importing the .obj into Studio, and going at it with the geometry editor, selecting polygons and saving them as material zones. That was not difficult, just took some time. And then I applied shaders (a fancy name for a tiled texture) or image files (the image of the cross-cut log, or the linear woodgrain) to the different material zones.

Well, that almost worked. But, as you can see, there were areas that glitched. Several of them. That area around the eye would not take the shader correctly, and no attempt to scale the tiles in that area would make it match up with the surrounding texture. The most absurd was on the nose and chin area where instead of applying the image of the cross-cut log, rather than applying to the whole matt zone, it applied to *each individual polygon* so that instead of the end of a log, I had an area dotted with tiny little pictures of the end of a log. And there was no way to get around that problem, either.

A quiery in the forums ultimately revealed that the problem was that the model was not UV Mapped.

U and V are the coordinates which tell the program where to apply a surface texture. And, without it, applying a shader is going to be very hit-or-miss. Unfortunately, by that time, my student copy of Maya had timed out and I couldn't get it open to try to address UV Mapping. So, effectively, I was stuck.

After a bit, I posted a quiery whether anyone would be willing to help me out. The online forums at the various 3D sites do have a lot of very helpful volunteers. But I didn't get any takers. A few weeks later I posted the quiery in a different forum and got a volunteer. She UV Mapped the .obj, and I went in and separated out a couple of additional zones (the inner eyes, so I could apply the cross-cut log image), and finally the Sawhorse had a skin.

He was still just a static prop, however. My helpful volunteer had offered to do some basic rigging, but then I didn't hear back from her and suspected that it was giving her some grief (I was right). Also, there was the issue that she is a Poser user and I only use Studio. This wouldn't have been an issue at all some 3–4 years earlier, but right around 2010 both Poser and Studio adopted weightmapped rigging, and they adopted different, incompatible versions of it. Both programs can still use legacy rigging, but neither can really use each other's weightmapping. I didn't know how cooperative a current version of Poser was going to be at giving a model legacy rigging.

Well, Studio also does rigging (obviously), and I did at least have a turorial on rigging in Studio. And it's a fairly simple model, so I figured that I might as well at least make the attempt.

Of course my tutorial was written for version 4.0 and I was using 4.7, so it wasn't a perfect fit. And I needed to stop and redo more than once. But in the end, I had managed to rig a Sawhorse!

I feel no end chuffed. (The wagon is a straight-out kitbash, assembled from pieces of several different wagons or duplicate copies of them.) 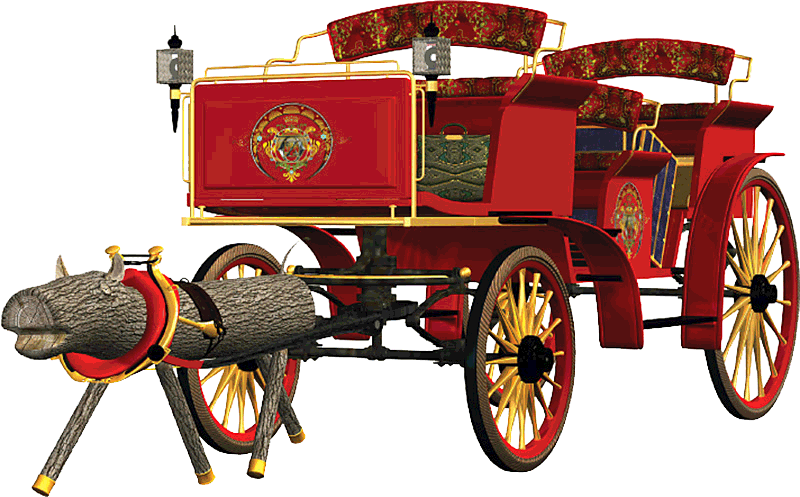