ZBrush is just plain weird. Definitely one of those software programs with an interface designed by Martians for Martians. However, it sits squarely in the Photoshop position in the field of 3D art. Which is to say that just about any 3D project gets run through it from one direction of the other at some point in its development. So I really needed to learn how to use it. (The first challenge is getting the blooming scene to hold still so you can work on it. )

And, I about did. Not master it, by any means, but by the end of the course I could now make it do something in the same ballpark as what I intended it to, eventually. 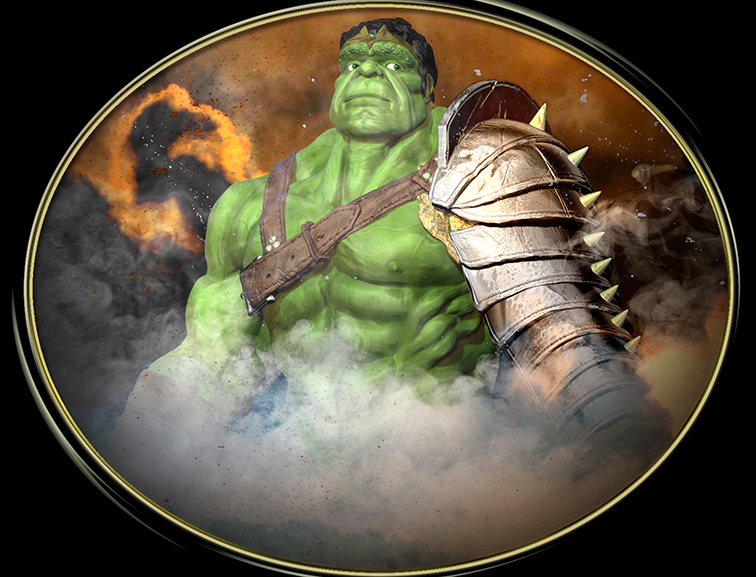 The instructor gave us a slew of reference drawings and photos of a colectable model of the Hulk in barbarian armor. Since, the last time I checked, the Hulk was the alter-ego of a modern city-dweller (with anger management issues), I couldn’t figure out why on earth he was running around in armor. Not that I suppose it mattered (I gather had something to do with a movie).

We ultimately went on to give his head a new topology (which you have to do with ZBrush models, because they are so high-poly that you can’t do anything with them anyhere but in ZBrush), UV Mapped it, and created Ambient Occlusion and Normal maps for it. Which was practice for people who want to get into the gaming industry, since you have to go through all that before you have anything that would work in a gaming engine, and still look anything like the original model.

But for the midterm, all we had to do was to render it (about a dozen times, with different materials applied) and build a composite in Photoshop. Well, hey, telling me to do something in Photoshop is kind of giving me an edge. But in the main I was rther pleased with how he turned out.