It wasn’t until after I retired that I finally had the opportunity to hunt down a class to learn Adobe Illustrator.

Barely in the nick of time. By the Spring of 2012 my old copy of FreeHand 10 (which had been superseded back in 2003 — but I found FreeHand MX to be unusable) would not have survived another System upgrade, and there was no way that I would be able to keep running Snow Leopard if I had to replace my computer.

A friend and fellow retireee from the Graphics Section (my former supervisor, actually), and I both felt the need to buckle down and learn the program which had ousted our preferred one. So we signed up for City’s course of Art 633, or; Intro to Computer Graphics. Which was basically an Adobe Illustrator class.

The class didn’t generate a lot of files suitable for posting, most of the coursework being set exercises to learn to use the various tools. But we did get to build one thing that I felt worth showing off. 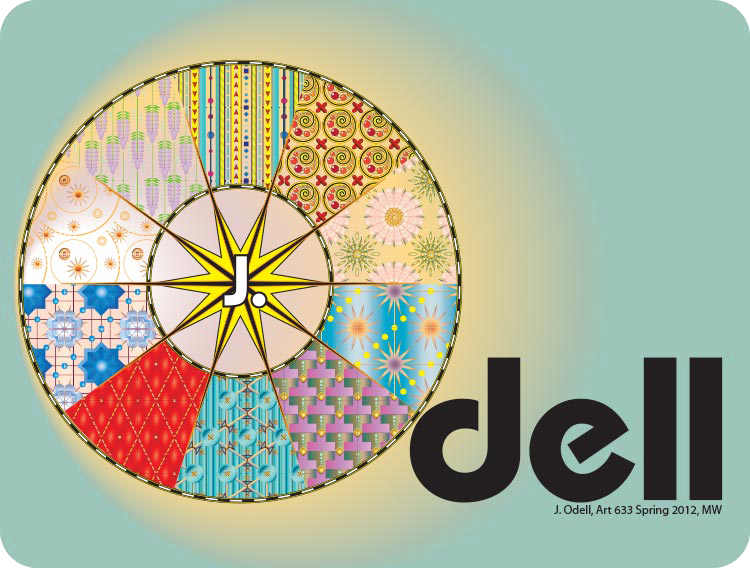 Building a tiled pattern in Photoshop is something that I’d been doing for some time, but building tiled patterns in Illustrator was rather different. We were using CS5 at the time, and I gather the pattern building process changed completely in CS6, so I'm not conversant with how to do it now. But I may end up needing to learn some day. Patterns are cool.

We were to create 10 different patterns, 5 with solid backgrounds and five with transparent, each with a 1" x 1" repeat.

Then we were to use them in a file which put them in an initial cap of our name. We were to:

Convert the initial cap to outlines first. Then we were to create a clipping mask with the patterns to put them into the initial cap, then type the rest of our name next to it. And then create a 4-color gradient for a background and put it behind everything.

I consider myself fortunate to have an initial with a nice symmetrical first letter, so I found that part of the assignment easy.

Frankly, while I can now use Illustrator, I still don't much like it. It isn’t FreeHand, which I used for over 20 years. Although, to be sure, Illustrator work is likely to be a component used in projects posted over in the Publications section as time goes on. As well as in the Graphics collection here.