This was actually the 2nd portfolio that we produced for this class. Our Midterm had consisted of creating a portfolio of all of our work up to the middle of the semester. Well, hey, I’ve always tried to post my midterms and finals here on the site, once a semester finishes. So once I had an actual portfolio built from the first half of the class, I kept it up to date and rolled each of the projects we worked on afterwards into it.

At the end of the semester, and four additional projects down the road (two of them fairly complex, multi-week projects) our final turned out to consist of building another portfolio. The instructor (who was new this semester, since our previous instructor had retired) had intended that the people who had made it through the class to the end might be able to use these in job interviews. I rather suspect that they could. He’d assigned a good range of projects. He also permitted us to extend our first portfolio to produce the final, so since I’d been doing that already I did so.

I’ll have to admit that with this project I’m just a little unsure about the actual legalities of using a lot of these images. Where our previous instructor had not wanted us to use anything off the internet, this one considered the net to be where a designer goes to get content. He was careful to point us at sites which were either commercial sources, or repositories of free content. But with things that come up in a general search, while it is probably legal enough to use them in an educational setting, I’m less sure about using them for general posting.

Well hey, I’m certainly not making any money from it. But let me make it clear, I do not own the rights to any of these photos. Although some of them I have paid for in my clip art/stock photography subscription.

I made a number of changes to the portfolio on this 2nd go-round. There had been some glitches in my first version that needed to be fixed. I also changed the color scheme and added a number of effects. In this final version the background was changed to black, white, and grey, leaving the actual projects to provide the color.

I also did not make any attempt to re-do what had turned out not to work in my midterm. One of our early assignments had been to create .gif animations in Photoshop.

Now, InDesign — which we were encouraged to use to build our portfolios in (since they were to be submitted in .pdf and InDesign is really good at exporting .pdfs) will export an interactive version of a .pdf complete with animations and page transitions, and all sorts of flashy stuff.

So of course I had tried to do an interactive .pdf which would play my animations. But it turned out that animations (and interactive page transitions) will only play if you open the .pdf in the Acrobat reader, in full screen mode, and will not even show up if the .pdf is opened from a browser. So that rather cut that idea off at the knees.

I have posted my .gif animations on a separate page. There are no animations in this .pdf. I’d learned better by the time I started working on it. 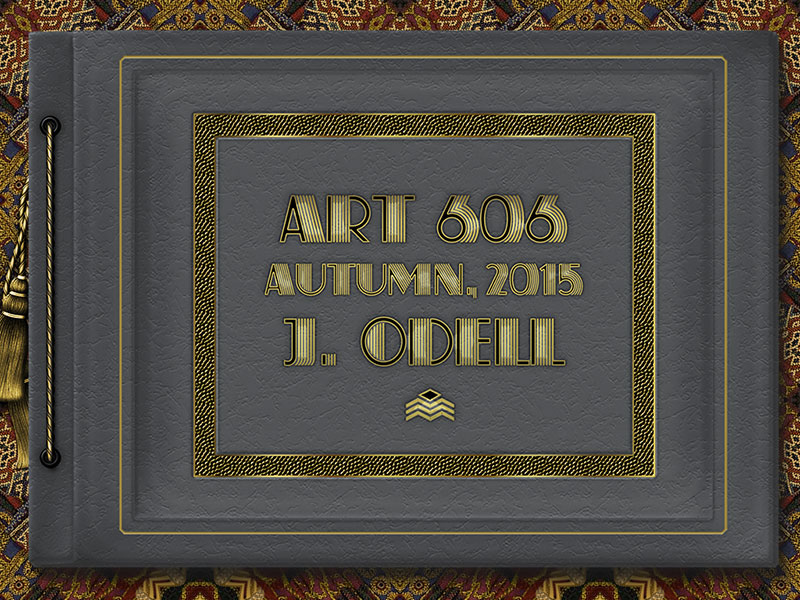