Our Midterm for 501 was the end result of a protracted series of exercises in what were effectively posterization, image transfering, scaling elements, and the use of acrylic paints. There were several exercises which led up to the cumulation, which was to be a self-portrait in black, white, and three levels of grey. We were also to add some graphic feature to the portrait which was intended to represent something about our experiences, interests, or whatever-you-care-to-suppose. 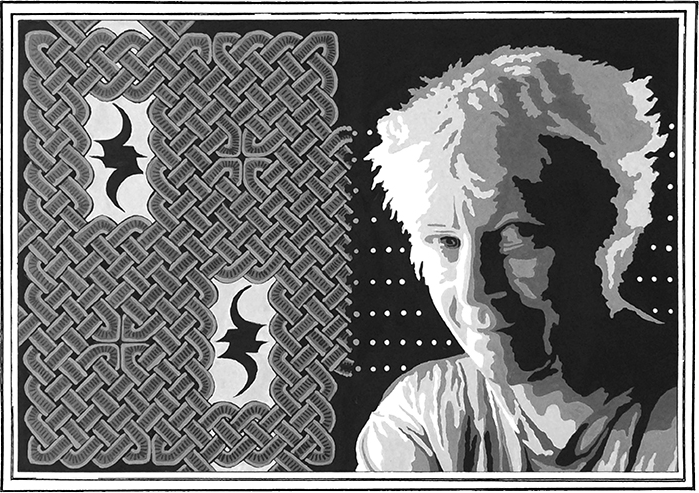 The first exercise was to produce the three levels of grey, which was trickier than it sounds like because acrylics are not at all the same color dry as they are when wet. Also, the black we used is much stronger than the white, so it takes quite a bit of tweaking to get it to the level it needs to be. We also needed to build a guage, which was a piece of heavy paper with a smallish hole. Which we were to use in the next exercise.

That one was the exercise in posterization. For that we were to start with a black and white photo of ourselves using one major light source, and put it on a light box (or a window) cover it with tracing paper and start running our guage over it, concentrating on what was visible in the small hole. Where we saw a division in the tone, we were to mark it. By the end of this procedure we were supposed to have a layout of our photo in 5 tones from white to black.

It wouldn't have been impossible to do it straight, but I didn't own a lightbox and was not convinced that I wanted to sit all weekend trying to see through two levels of paper and a layer of dirty glass, plus a windowscreen, trying to find the edges, blind. So I threw the photo into photoshop and hit it with posterizarion. I didn't actually use that version, but I did use it as a guide. I'd look at the printout for where the program put the edges, and then I'd see if I could find that division point on the photo, and then I'd try to follow the edge where I saw it. I ended up simplifying Photoshop's version to some degree. But I did do the assignment myself in the end.

From there we were to take a 15x20 inch piece of illustration board and transfer the posterization to that, including whatever additional elements we had decided to use to make the composition a viable self-portrait.

I used a graphic symbol which I had come up with for some earlier assignments in pattern making, and an old set of instructions for doing celtic interlace, from back when I was still active in the SCA.

Quite liked the result.